Parallax Film Festival is a free independent festival which takes place on Saturday, 12th and Sunday 13th, November at the Collection in Lincoln. Follow @ParallaxFest or visit parallaxfest.com for more information and to book tickets. 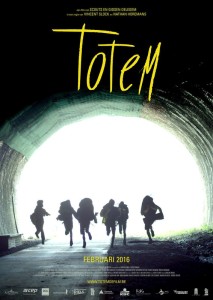 Boyhood is scary, the world is a big and dangerous place for a young boy. But Totem reminds us that those dangers are what made adventures so exciting, and that as long as you have a friend or two by our side, everything will be alright. We follow Vincent (Julien Du Bosch), a Scout who embarks on a patrol to earn his ‘totem’. He is shy and wary at first, but when his fellow Scouts are put under threat by two thugs, he gains the courage to fight back. Watching Vincent and his friendship with the other Scouts grow is empowering to watch and is sure to conjure up many childhood memories from any audience member.

Directors Vincent Slock and Nathan Horemans do an excellent job of capturing the atmosphere of the film. The camera moves with an almost unnerving grace, allowing the eeriness of the forest to creep up our spines. The sound of the film sneaks in behind the visuals as every last detail can be heard. We are subconsciously absorbed into the world and it is not until the credits begin to roll, that we slump back into reality.Totem captures the true essence of childhood. It may not do it in a conventional manner (subtitles are very quick and easy to miss), but when was the last time a film was praised for its conventionality? Totem delivers the most important gift a film can deliver; escapism, and that’s why it’s so endearing.

Totem will be screened on Sunday morning

Einstein’s theory of relativity is incredibly complex to understand, yet alone being able to explain it to your eight year-old son. It is like trying to explain the off-side rule to your deaf grandma. Relativity Explained to Children sees a father who is guilty of forgetting his son’s school assignment. To redeem himself, he explains the concept of E = Mc2 to his son in order to get him the best possible grade. Although one of physics’ most famous theories is the most obvious aspect of the film, it only acts as a thin surface. Scrape that surface away and you see a fantastically intelligent dissection of the relationship between father and son.

It becomes clear that writer and director, Pierre Gaffié, has something interesting to say. A man will go to great lengths to connect with his son and Relativity Explained to Children cleverly highlights this theme. This message is conveyed in greater detail by super-convincingly natural performances by Dominique Parent and Sylvie Audcoeur. The masked nature of Relativity Explained to Children requires attention and thought from its audience, and that’s why you should open your mind and enjoy this smart comedy-drama.

Relatively Explained to Children will be screened on Sunday morning

Engulfed by Destiny in Skopelos:

Young love can so painful can’t it? A boy and a girl living on the Greek island of Skopelos find their relationships pulled apart by the most evil of villains; life. The beautiful backdrop of Skopelos, harmoniously enlightened by the mellowing music, makes the tale worth telling and watching.

Despite its youthful nature, Engulfed by Destiny in Skopelos is a surprisingly mature film. Cinematography is as tight and professional as any big-budget production and the actual narrative ticks along with unforgiving pace. Do not be fooled by the blue sea and the sunny sky, this is not a feel-good film. Engulfed by Destiny in Skopelos delivers more than just a cheap smile, it is painfully real. Life isn’t a fairy-tale, even for children. Happy endings don’t always occur but we move on.

Engulfed by Destiny in Skopelos will be screened on Sunday morning