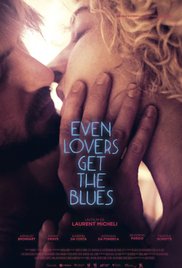 Even Lovers Get the Blues will have its UK premiere on Friday 17th March at the 2017 Indie-Lincs International Film Festival.

Even Lovers Get the Blues is Laurant Micheli’s intimate exploration into the romance and heartache of six Belgians who are coping with the loss of one of their friends.

In its sexual explicitness, Micheli’s feature succeeds in creating a great sense of intimacy between its characters and the audience without being too forced or distasteful. The honest- and at times awkward- portrayal of both sex and a desire to meet the needs of one’s partner allows us to sympathise with the emotional strain each character is facing and lets us find ourselves amongst them.

Moreover, the way in which physical intimacy is discussed creates a well-layered narrative of multiple different elements; despite appearing to be a very simple concept at first. The character of Ana (Marie Denys) uses her sexual prowess to cope with the grief over the death of her boyfriend, while characters Leo’s (Séverine Porzio) and Louis’ (Arnaud Bronsart) attitudes toward sex are trivialised by ideas of starting a family. Further in terms of Leo and Louis, Even Lovers Get the Blues succeeds in displaying a refreshing shift in the stereotypical dynamic of a male/female relationship, by instead having the male character Louis strive for children and the notion of a nuclear family, while Leo appears to remain disinterested and lack commitment. Sexuality and the morality of both adultery and polyamory are also discussed in a delicate and refreshing manner; in which people at all sides of the relationship are able to be sympathised with.

Even Lovers Get the Blues succeeds alone in its simplicity. Its cinematography is intimate and use of colour produces intoxicating visuals. Laurant Micheli’s theatre history adapts well to the screen, and the sexual freedom he decides to portray within the film creates a raw reality similar to what could be found on stage. Such liberation means that topics of fluid sexuality and the generational fear of the meaning of life are expressed freely and translate wonderfully towards audiences. Overall, Even Loves Get the Blues is an honest and enjoyable portrayal of the trials and tribulations of relationships, and presents a question of what it really means to devote oneself to another person.